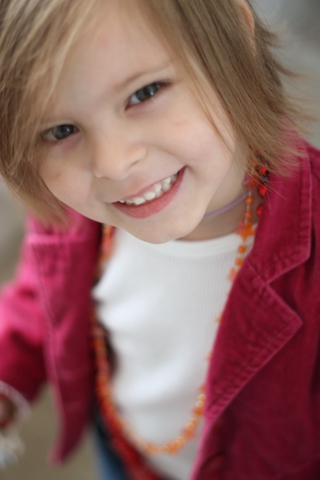 See this face?  It's the face of a kid who is wildly joyful about everything, it turns out.  And who loves life.  Loves her stickers, loves her sister, loves her new dog (more on that later), loves her family, loves her milk in a cup with a lid on it, and loves her camera.  She loves everything.  Equally, I think.

Today I asked her what she will be bringing to Show and Tell at preschool.  She loves Show and Tell day, so I was sure she had already thought about it.  She returned with an answer immediately.  "My camera.  I'm going to show everyone my camera.  And I'm going to take a picture of the class."  She was so confident in her answer that I knew she must have been planning that for a while and she was probably excited about it.  That made me proud.

I had bought the camera for her as a Christmas gift.  She has pretty much grown up the daughter of a blogger and perpetual picture-taker, and over the last year she has been "taking pictures" with a broken camera.  I could see that she loved it. So I bought her a real camera for small children.  She loves it, and is very serious about it.  But it can be a little tricky to use.

Which is why I suggested we practice using it again before she took it to school.  Long story short, after several blurry pictures and my insistence on her remembering how to use it right so that the pictures weren't blurry and cut off, she decided to take a box of cars for Show and Tell.  Worse than the fact that she had changed her mind was that I could see I had killed her joy.  Knowing Evyn, I knew she would be disappointed if she couldn't get a decent picture of her class, and frankly, I was overconcerned about it – to the extent that I sent the wrong message.  I am a perfectionist myself and have worked very hard to impart on Evyn that things don't have to be perfect to be great, enjoyable, beautiful, etc.  But sometimes I miss.  Like today.  And in the process I drained the color of cheery bright joy right out of her face.

I tried to undo it, but it was too late.  She didn't want to take the camera to class because it would take blurry pictures, and no amount of my telling her that's okay could undo the bit of damage my critical tone and (no doubt) furrowed brow had caused.  She didn't get melodramatic, or throw a tantrum.  She just insisted that she wanted to take the cars, which I think hurt me a little more, because I knew how sure of her camera plans she had been.  And now she wasn't.

So off we went, Evyn holding a box of cars in her lap on the drive to school, while I added another demerit to my mental count of mornings I wish I could undo.

We got to school and met the teacher at the car door, where I confessed that I had killed my daughter's joy (I swear that drop-off is my very own confessional booth; every morning is a new story).  I related the story quickly to her and she looked at me with such compassion and wisdom and said very frankly, "Get over it."  Seriously, those were her wise words.  And she was right.  She said it again, "Crystal, just get over it.  And don't do it again."

And there's the lesson.  Yes, there is also a very important lesson in not teaching your children to critique and question themselves too much – to leave that for things that have to do with their character and not their performance.  I do, after all, want to raise confident girls.  But as a person who is constantly in my own head and often talking down to myself, worried I'm going to screw up the only job I have, I think an even more important lesson -  today, anyway – is to forgive myself and move on.  If I'm going to teach my kid to not beat herself up when she's not perfect, then I guess I had better do the same.

So, if this applies to you today, then here you are: Get over it.  You'll be okay.