If you've been hanging out this blog for a bamillion years then you know Ev used to be a pretty good shopper.  But things change.  And she's taken to complaining about it.

Several years ago I started joining in the HubBub that is Black Friday.  There's just something about waking up while it's still dark, parking three miles from the store, and shopping in a groggy frenzy with five hundred people.  It's like Christmas Kickoff.  Way back then I had visions of my little girl joining me for Black Friday.  So when she started changing her tune about shopping in general I just assumed she wouldn't be my Black Friday Wing Man.

Somehow, though, James managed to get her excited about the idea.  And this was our year. 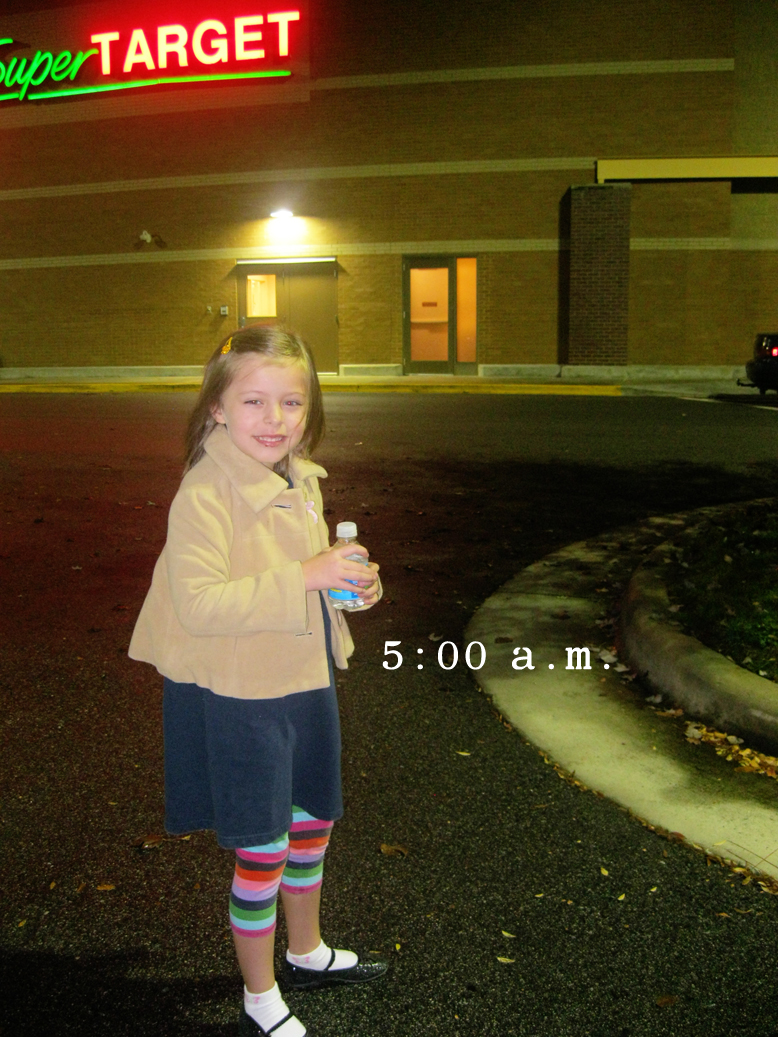 Last night she laid out an outfit she put together just for our shopping trip, went to bed dutifully and made sure to fall asleep quickly in preparation for our big day.  We woke up at 4:00 a.m. to make the 1-hour pilgrimage to Raleigh, got dressed in the dark, grabbed a sandwich and snuck out of the house.  Evyn was particularly enchanted with the fact that it was still dark, and would be for a while.

We started at Target.  And stopped for a caffeine break.  E got the usual "pink drink" (milk with three shots of raspberry syrup. 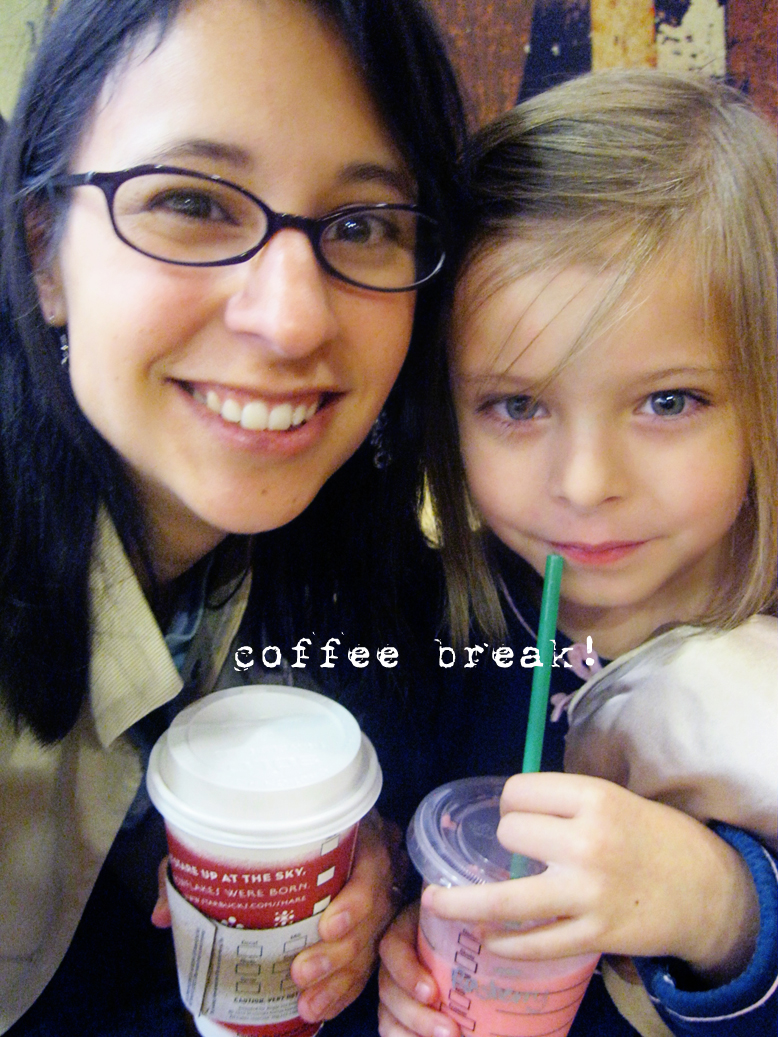 Honestly, Target was a bit of a bust.  Bright and friendly as usual.  But nothing special.  Evyn suggested the mall across the street.  That's where I hit some serious sales (skinny jeans at the Gap for $15!).  Totally should have gotten pictures of the pile-o-goods, but I'm kind of glad I didn't.  Sidenote: We did take the opportunity to also pick up a few things for charity but I wish we'd done more.  In fact, the thought occurred to me that next year we should try to put a Christmas together for a family using Black Friday deals.  (I saw a similar idea using coupon-ing in December to help stock a food pantry in a magazine).

After several HOURS, we stopped for coffee break #2.  This is Ev with another "pink drink" and a little prize she picked for being incredibly easy to shop with. (Have you ever been to "Justice"?  That place is a land mine for mothers of 6 year olds.) 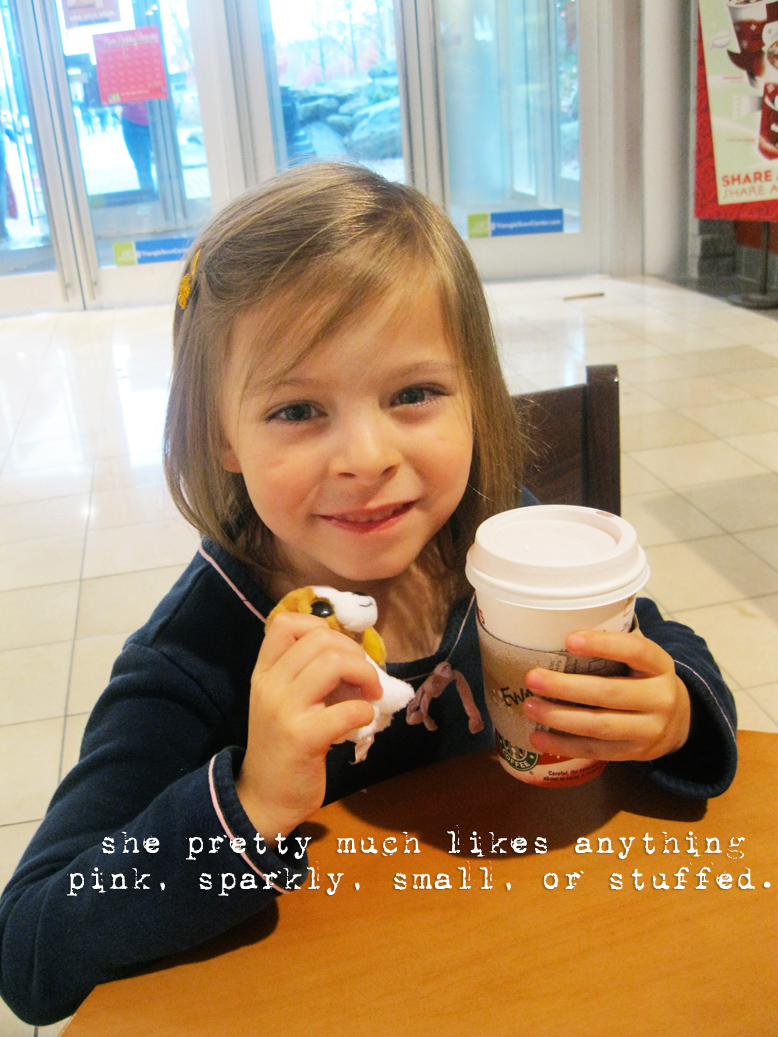 I asked her if she would join me again next year.  She said she'd "have to think about it."

Maybe she just needs to sleep on it… 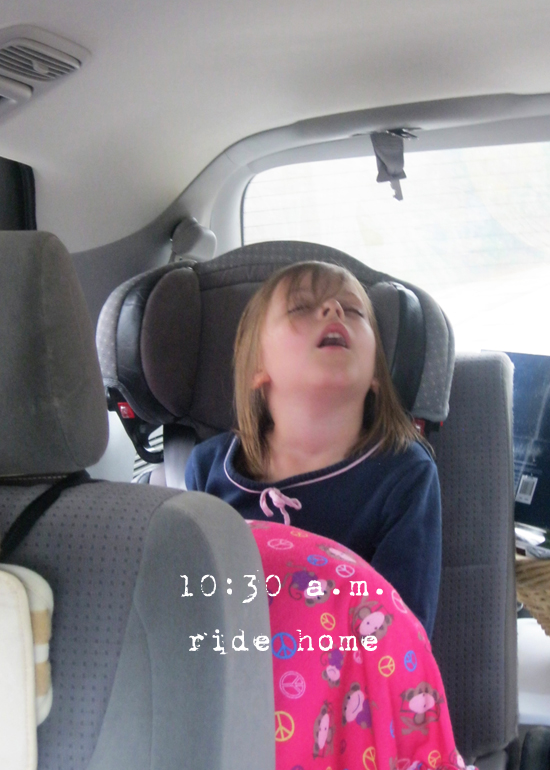 By the way…one small detail that I noticed is lost in this post is how incredibly grateful I am that my husband was intuitive enough to know how important this actually was to me, even though I played it off when I realized Evyn might not want to go.  "Time together" is my love-language and I have been anticipating my first Black Friday with one of my girls for a long time.  So I'm incredibly thankful that James found a way to get Evyn excited about it enough to go.  Now, if she doesn't join me next year it will be because I took a bit too long at the Gap…