J. went back to work today.  It was an incredibly rainy week, but we had fun introducing Daddy to our life:

First, we taught him how to do E.’s hair: 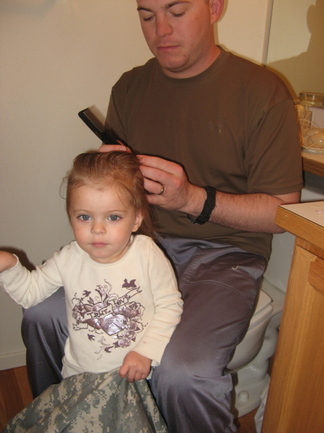 Then, we took him to the thrift store.  I didn’t expect him to actually rummage with me, and it took me 20 full minutes to talk him out of bringing home a large, broken mesh wire crate.  I still wound up having to bring this broken bamboo tray and cooler-thingy (read: garage junk) home: 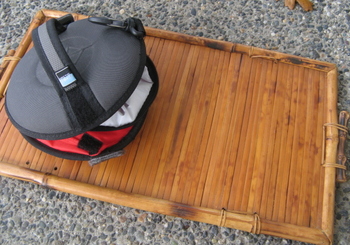 We went to the Hands-On Children’s Museum (it was a UT Game Day): 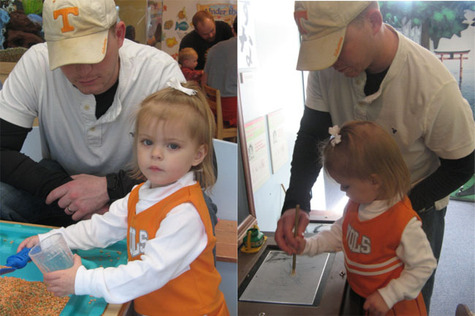 Then went to sushi, where E. showed him she, too, likes edamame! 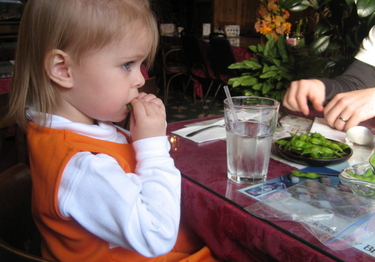 And then J. humored me as I made a "quick stop" at an antique mall.  Thankfully, they had a little cafe in the store: 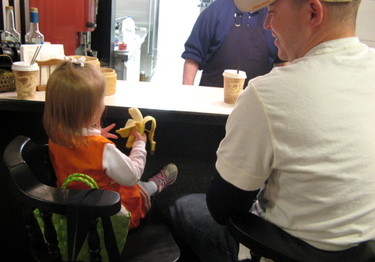 Yesterday, J. and I played racquetball and worked out at the gym together (the racquetball game was reminiscent of my first try all those months ago – apparently neither of us is especially suave).  Then we took him to Barnes & Noble where I showed him how I figured out that I can enjoy a cup of coffee and a book while entertaining E. with the train table in the kids’ section. (sorry, no pictures; I think J. is getting creeped out by all the picture-taking)

I’m incredibly grateful to have J. back.  In fact, this week has been so "charmed" as to be a little boggling (I keep thinking, what’s the catch?).  I’m waiting for someone to call and say it was a mistake and they want him back – joy over.  Ironically, as ridiculous as that sounds, it’s not so far-fetched in today’s Army. But I know that’s not going to happen in our case.  And I’m taking this time to enjoy the mundane without a constant fear nagging me.

We do, however, still feel very invested in this war.  In fact, I sense J.’s frustration at the Great Divide between what American liberals and conservatives argue about and what he feels we should be discussing based on his experience with the Iraqi Army and their justice system (which is, apparently, little more than a "catch and release" program that American and Iraqi soldiers alike are frustrated by).  I was a little surprised at the answers J. had for me when I asked him about this war.  But that’s for another post…

I am thankful for J’s return; but I am mindful that we still have friends and fellow soldiers in harm’s way.  Maybe your friend/husband/son/daughter is one of them. I’m still praying for their safety.