I wish I had a quarter for every time I thought that.

The day he surprised me after his first tour in Iraq – he drove all night from DC to get to me in NY (even got pulled over by a cop, but was let go when the cop, apparently worried about his disheveled appearance, asked where he was coming from – “Baghdad.”).  I’ll never forget that feeling in the early morning when he crawled into bed and hugged me tightly.  I can’t describe what that meant to my mental health – I had started grieving his possible death as soon as he left on Valentines Day; I was bombarded with images of war and uncertainty all day at the television station where I worked; and I went to bed in tears every night as I drifted off to the general’s debriefing on CNN, and woke to the same every morning.  Then, there he was, holding me, and I breathed all that anxiety out.  He made it.

He had come home for an unexpected family emergency so there was no hero’s welcome.  But he was home.

The day he called me from his second tour.  Since he was on a small ten-man team and fairly busy with the job at hand, we didn’t get to speak often, but when we did it was at length.  At the end of one conversation he mentioned it – almost as an afterthought – “Oh yeah.  I got a bronze star.”  Not a small prize, but I was proud of him.  What an accomplishment.  He made it!

Usually an honor of that caliber comes with a somewhat elaborate ceremony.  It was sent to us in a padded envelope in the mail.  James didn’t seem bothered.  But I was.  He had braved a pretty dangerous mission for that star.

And I cannot describe the wave of relief when he called to say he was in Germany, on his way home.  Evyn and I arrived at the airport, excited to finally welcome him home.  It would be a fairly plain scene – no Army band, no large group of soldiers and families.  His team had left as detachments and came home equally singular and almost unnoticed.  I wish there had been the pomp and circumstance to match the amount of hell he and his team had been through.  But I was just so grateful he was home.  This was a tour he himself was most unsure about.  But he made it.  The whole team made it. Uninjured.  Alive.

He’s in the Guard on weekends now.  Our life is a lot more calm and predictable.  But I know it bothered him that he left as a Captain.  Before he dropped his papers, there were talks about his track to Major.  He never said it, but I know he was thinking it would have been nice.

And here we are.  Tonight he came home from drill with this: 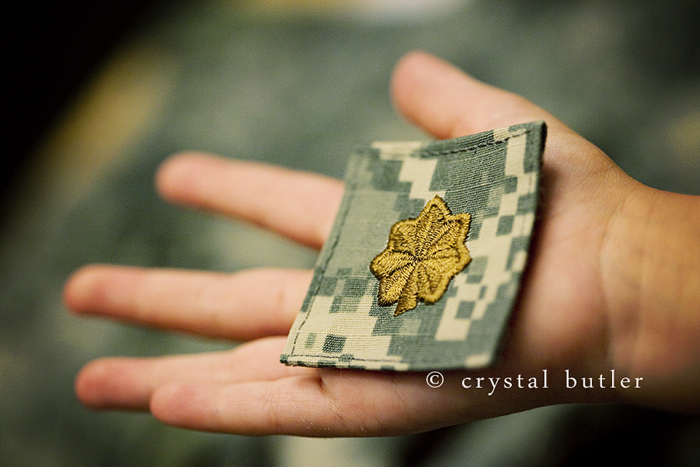 There’s a shinier one on his beret.  But after everything else, this seems fitting. 😉

Congratulations, J.  You made it.