Did I ever tell you James joined the Guard after he got out of the Army?  Well, he did.  The details would bore you but he will not deploy overseas within the first two years of his commitment, and he won't likely stay in the Guard longer than a year or two.

Last week he went out of town on an MI training.  He was to wear his ACUs every day again and needed to finally put on all his badges, while at the same time updating the badges for his dress blues.  Those badges are a bit shiny – doesn't this one look like a McDonald's toy? 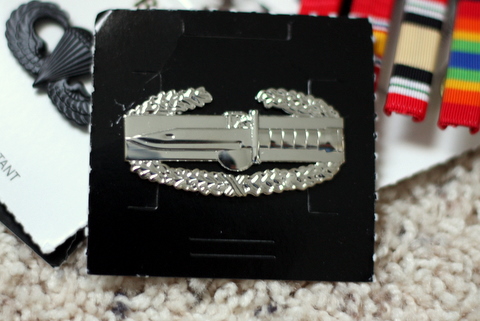 I'd never seen this badge before.  It's a combat badge.  Turns out James was shot at by snipers who weren't that good at sniping.  I was a little surprised, and I guess in the grand scheme of things over there I shouldn't have been.  James wasn't infantry, but his team was kind of left to fend for themselves out there quite a bit.  I knew there had been lots of "incidents" – involving bombs and snipers and fire support (or whatever its called when bradleys suddenly show up to level a building for you).  But James was so exhausted from it all by the end that he never got around to telling me everything.  And I guess none of it seemed extraordinary or newsworthy at the time; after all, this is just how it was over there.

But watching him pack up his ACUs for the trip, reflecting on the seven years we spent as a military family in the Bush administration, and reading through the archives here, it dawns on me how extraordinary our life really was.  And we miss it sometimes.

Evyn barely remembers.  And Ashlyn will never really appreciate it.  That their father was a soldier once. 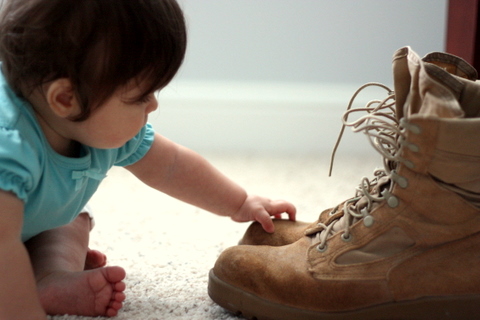 When James returned I asked him what it was like to wear his ACUs everyday again.  It was just a week of training in the Guard, but he said he felt important–a sense of pride–because the uniform stood for something.  I understood.  He's still finding his way, his sense of purpose, as a civilian.  We both are, a little.  Our life is exactly what we wanted for our kids – ordinary and calm.  With room to breathe.   No more last-minute orders and upheavals and good-byes.

It was difficult, and we wouldn't go back to it, but we can't help but look back sometimes.  It was, after all, an honor.

And for those still serving – take a moment to pray for their peace and strength and safety.