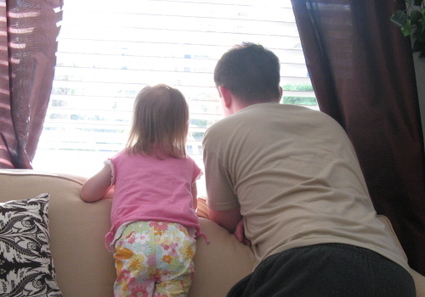 Last Monday, J. accepted a job as an industrial engineer with a pharmaceutical company.  The industry is strong, the position itself will get continued education with plans for promotion in a couple of years, and we will be moving back to the South (North Carolina).  The other two positions he had to choose from were as an engineer for an oil services company in Texas, and as an operations manager for a wind farm.  The wind farm was an excellent opportunity, but would likely always be in the boonies.  And as much as I love Little House on the Prairie, I didn’t want to live like Laura (a girl needs her TJ Maxx and Target). J. loved the oil services company, but not the industry so much.  And we didn’t want to live in Texas forever (sorry, Texas-lovers).

We are all at once excited about our future and sad about leaving the Army.  It really is a loss for us.  Some very well-meaning friends and family have called to say they are "relieved" that we are getting out.  The thing is, for us it’s been a privilege, an honor, to be in the Army for over 6 years – especially during this time-frame.  Not everyone – particularly civilians – can appreciate that.  But then again, they haven’t lived the news for the last six years.  Which is another reason it’s so difficult to leave this life.  I feel like we are about to enter The Land of People Who Just Don’t Understand.  My Army friends smile knowingly when I say that.  In fact, sometimes I avoid discussing my feelings about our experience on this blog because without the context of being an Army wife during a war, I wonder how readers interpret my thoughts.  I’m going to put some of it out there anyway.

It’s not just a career, or a thing we do, it’s who we are, and have become.  We’ve been part of the Army during a pretty tumultuous and trying time.  We’re not walking away easily.

With all the debate and opinions, there have been times that I have wondered what we’re doing this for.  Yes, I understand the right to dissent and disagree, protest and argue, are what we are fighting to keep – or gain for others.  And I appreciate that.  But there are our rights, and then there’s common decency.  Take, for instance, the protest I had to drive through at the opening of our gate on post – essentially the front steps of where soldiers live and work (I was grateful my daughter wasn’t old enough to understand).  The signs told us to abandon our mission, to just "refuse to deploy!"  Besides thinking that the protest was in the wrong place to begin with, I wondered what sense this made?  Did they know what would happen to this country if our soldiers were to suddenly pick and choose which orders they followed?  I cried for an hour after that as I shopped the commissary on post.  Yes, I took it personally.  And how else could I have taken it, really?  Soldiers do not take their duty lightly. We’ve made a very personal investment in defending this country and others.

Last summer J.’s Humvee was hit by a bomb (he survived unscathed).  It was bound to happen at some point.  He and his driving partner were almost always in the lead vehicle in a convoy.  Which means if there was a bomb to hit, they would probably be the ones to hit it.  A group of corrupt Iraqi police had told them the road was clear, then hit the ground for cover after J’s team passed – a sure sign they knew what was coming.  Do you know what happened when J. went to arrest and question the Iraqis who were responsible for knowingly letting them drive over a bomb?  He had to let them go.  Their new story was that they’d "tried to warn the soldiers about a bomb ahead."  A flat lie. But in Iraq, evidence isn’t enough to hold a known terrorist.  And even a conviction means only a short 3-4 month stint in jail before they are free to terrorize again.  That’s what our soldiers are up against over there.

Our husbands have a million stories like this.  And it’s why it hurts so much to be a military wife among American politics these days.  And despite all the conflicting emotions, I truly feel blessed to have been a part of this history.  I am proud – PROUD – of J., of Clay and Karen, Christine and Dave, of Ben, of Phil, of everyone willing to wake up every day and follow orders. (This pic is from the day J. was commissioned) 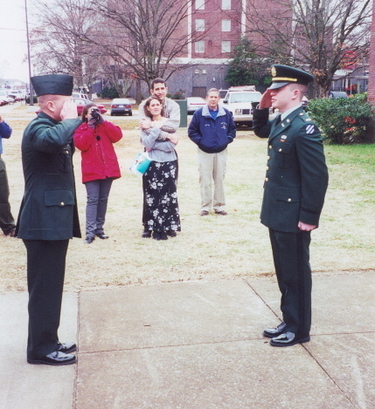 This isn’t a political blog, but this is a blog about my life, which has been affected by politics for over five years now.  Regardless of your politics, you’ve always been supportive.  And somehow I feel okay sharing my thoughts with you today.  You won’t find too many military spouses willing to discuss such matters outside the military community, much less blog about it.  It’s a bit of a no-no for many.  We’ve learned to be gracious, to keep our opinion to ourselves, and for heaven’s sake to not bite people’s heads off when they compare their husband’s weekend business trip to our 12 (now 15)-month deployments. 😉

For all of you military wives, I am sad to be leaving your community in a few short weeks.  I will always appreciate your family’s sacrifice.  If your husband or wife is deployed, please know my family is praying for you.  Stay strong.

Today is Military Spouse Appreciation Day.  Please take a moment to pray for our military spouses.