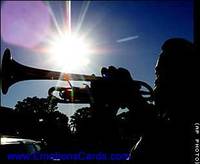 This morning I went to my new Bible study at PWOC, located at the main chapel on post.  As I walked in, I noticed that there were several soldiers lined up, apparently "practicing" for something. I wondered, is there a memorial today?  Military funerals and memorials are rehearsed to precision.  That thought alone made me sad.  That this is a part of our daily lives – memorials for young men and women.

After worship, before moving on to our class, one of the leaders mentioned that we would need to finish timely.  There was to be a memorial for a soldier in our chapel that afternoon.  Ah, I thought.  So we did lose another one.  So. So. Sad.

Then I went to my class – Too Busy Not to Pray.  A large group of 16 settled into our seats and got started.  The usual chatter and excitement of a new class bubbled in the room, catching up after not seeing each other over the summer.  We started the discussion. Then, there it was.  The sound of a trumpet right outside our window.  Just two notes – two notes – into "Taps" and several of us were in tears.  The trumpeter was obviously practicing for the memorial as well.  He stopped after just a couple of bars.  But we were already scrambling for tissues.

The teacher paused for a split second, obviously wondering if she should acknowledge it.  But she decided to keep the class together and press on.  We had a nice discussion for another twenty minutes, talking about what kept us from praying, what drew us to prayer, so on and so forth and then POP! A single gunshot. All of us jumped.  POP!  Another one.  And there it was…the lead in to the full strain of a trumpet now dutifully rehearsing "Taps."  That was all it took for one poor girl to gather her things clumsily and mutter, "That’s enough.  I have to go.  My husband’s batallion [obviously deployed] has had a rough month [Army-speak for "lost soldiers"] and I can’t take this."  Several of us were already in tears.  Before she could leave, our teacher asked to pray.

"Taps" continued to play in the background. Several of us (including me) were sobbing as the teacher asked God for comfort – for those of us whose spouses were in constant danger, for the families of this poor soldier who would be honored today, for all of us trying to serve this country and countries around the world.  We continued with the class, but I didn’t entirely recover.

After class as I picked up E. from childcare, I was relating the story to the woman in charge (also a military spouse).  I told her how my heart was heavy for these families.  She smiled and hugged me, gratefully, "Thank you.  You don’t know how much that means to me.  The soldier was in my husband’s batallion.  In fact, I just found out we lost another one this morning." She paused. "Three weeks, Crystal.  They’re three weeks from coming home."  I just shook my head.

I went home and logged onto a military message board, where I opened up a post from a poor woman who had just been told her husband’s truck was hit by two bombs – but they had no additonal information for her.  This is actually totally against Army protocol – to give families half-information.  But sometimes people mess up.  At this writing, hours later, this woman is still bawling her eyes out wondering if her husband is dead or alive.  We have been taught "no news is good news," so that is the single thread she is hanging onto.

I’ve been reflecting on this all day.  That this is our life.  And I bet the world outside doesn’t even know. I was talking to a friend tonight who said her eyes have been so opened since she married into the military.  After 12 years in a professional life as a civilian, she married her Army husband only a few years ago.  She says she never knew.  She saw it on the news but she never really knew or appreciated  how much there is to deal with – how very many soldiers have lost limbs, lost life.  How many young wives and mothers were now widows.  How bombs and Taps are a part of our daily lives. We’re all affected by it. Even after returning, many of them have lost their sense of peace, silently suffering Post Traumatic Stress Disorder.

She said she is still awed by the military community.  Frankly, today, I am stunned by it.  Not that today’s events were so unusual than my other days. I am constantly reading messages from women about their husbands having lost a friend in battle, or a soldier in their unit having lost limbs.  I am frequently re-routed around our Army post by orange cones and men in uniform guarding the street for another memorial.  But today I am exhausted.  And tonight I will cry.  I’ll cry for the soldier’s memorial today, for the family who was notified this morning that their loved one died just three weeks from his homecoming, and for the poor woman who is sitting in her house alone and wondering what will come of the shocking news that her husband has been hit by a bomb.

Please don’t misunderstand this post. I don’t want pity.  I want prayers for these families.  I want people to know.  It’s not just the news.  It’s our life.

Thanks for being a listening ear.

Links of interest: Taps: the tune & history, The Music Man