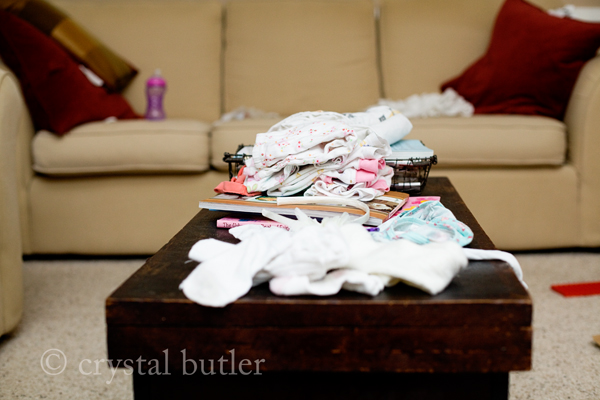 I recently took meals to a friend (working mom) who was not used to being home with her toddler for long stretches at a time.  I arrived around dinner time, and the house looked pretty normal – you know, a day's worth of toys scattered about the livingroom.  She's enduring a difficult pregnancy so it's exactly what I expected.  She welcomed me in and started to apologize: "I'm still trying to figure out how to care for a toddler and keep the house managed at the same time.  Is this kind of mess normal?"

Christy, are you kidding me?  YES!  Of course, I have a couple of friends who manage to keep the clutter to a minimum because, well, frankly, they spend any time not feeding their children tidying up after the children.  Not me.  I'm too busy – doing other stuff.  Emails, phone calls, bills, photography stuff, research stuff, crafting stuff – anything BUT picking up every single minute.  I've tried that.  And it's just futile.

So I decided to take a particularly messy day to post some pictures that I am hoping will make anyone who has asked the question, "Is this normal?" a little better.  Granted, this was a little extreme of a day – I DO normally keep it to a much duller roar.  But my point is, it happens.

Counterspace?  Looks like a perfect perch for all the stuff we're trying to keep out of the Toddler's and Dog's mouth to me! 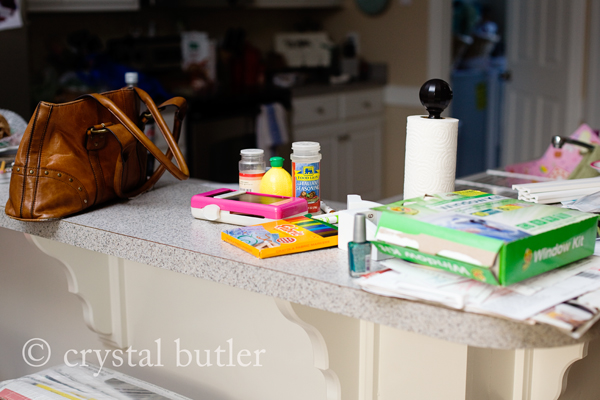 Today's groceries left out?  Hey, I've already put my pregnant self through the torture event that is Walmart with two small children. If it doesn't need to be refridgerated, it stays wherever I've dropped it until the Husband comes home (what's that?  there are princess toys mixed in with the groceries?  My girls think the kitchen table is a playroom): 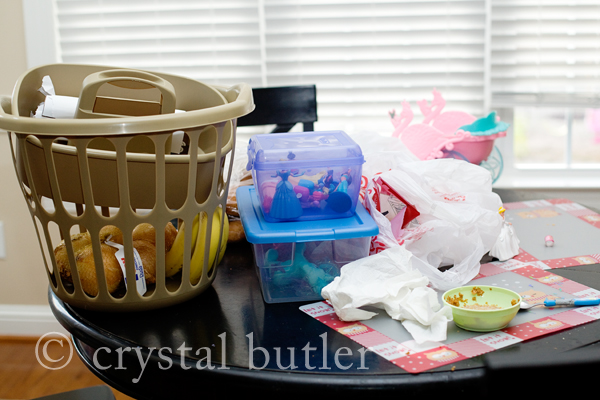 Can you believe this is AFTER I've asked the girls to please pick up? 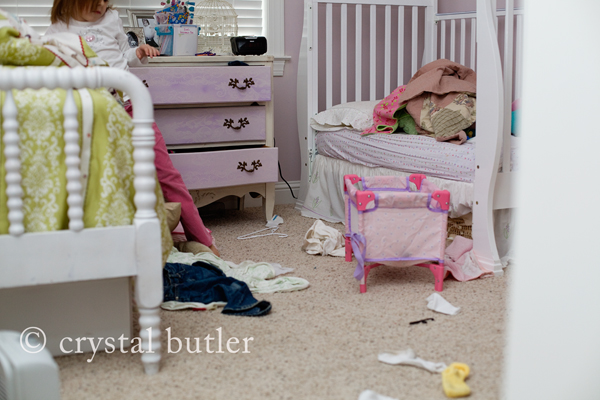 You wouldn't know it to look at these pictures but I'm actually a pretty organized person.  And this isn't typical, although it's not too far from our day-to-day.  I'm spending my days finding a place for everything, making our space functional in anticipation of The Boy.  And it's actually going pretty well.  I'll be sharing our ideas over the next few weeks.

But for those of you who find yourself at home, with a toddler, and just can't seem to keep the house "guest ready" – take heart.  It's just a season.