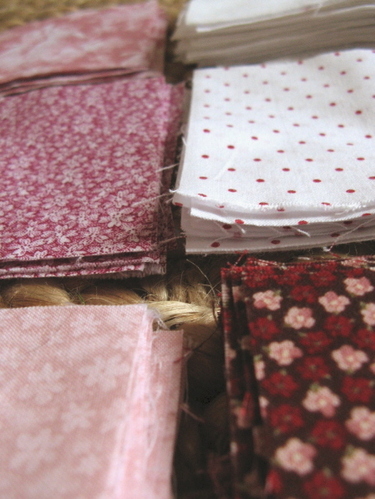 Thank you for the many kind and supportive comments you’ve left.  I have to admit I was nervous about sharing the ugly stuff on a blog that’s usually pretty.  When J. was deployed it felt so much more justified to sometimes blog about depression, anxiety, and the I just can’t feelings.  I didn’t expect to have such dark days again and it took me by surprise.

I am a work definitely still in progress.  When the therapist told us "this is a process, not an event" I was both peeved (why can’t this just be over, already?) and comforted.  Because I know I will have setbacks; but hopefully, it won’t be the end of the world, even if it feels like it for a time.

Speaking of progress: about four hundred and fifty-two years ago, I mean, last year sometime, I said I was going to make a quilt. I know nothing about quilting, and to be honest, don’t have a  desire to know all the ins and outs of real quilting, but I had a very specific picture of a pinwheel blanket in mind and decided it couldn’t be that hard.  Until I sat down to actually figure it out.  I had no clue where to start and so the project was shelved, until I ran into this handy little reference via the Sew Mama Sew blog a few weeks ago.

And so now, this quilt is officially a w.i.p.  Now, I’m blogging about this project in the hopes that I will, in fact, complete it, but if it isn’t finished in a timely manner and any of you ever comes back to me and asks about this quilt, I will have to quote some silly business about it being a process and not an event…