It’s been quiet around here at times, hasn’t it?  A few of you have noticed.  When J. was deployed I had to be careful about that because some of you would think the worst.

I won’t bore you with everything.  It’s been stressful here.  Very. Very. Stressful.  I pride myself on being in control of things.  But, who am I kidding?  I’m not in control of anything.  And I have been reminded of that over and over and over again these last couple of months, as J. has been preparing for our exit from the Army.

The key to getting out of the Army is preparation and job prospects – lots and lots of job prospects.  The thing is, the civilian world has such misconceptions about what military members can offer in terms of skills.  The bottom line is, they are capable of far more than being a security guard at your mall.  But often that is difficult to prove because there’s so much explaining involved.  Anyway, the anxiety of the job hunt came to a head last week for us, as J. went through 11 interviews in two days.

He came home that Wednesday, drained.  That night there was a story about some Marines on Oprah. I think J. got a little teary-eyed.  The Marines talked about their experiences in Iraq, how they would do it all over again, even with the heartache they endured.  They talked about how their fellow Marines were their family.  I asked J. if he was going to miss the Army.  He said, "Yes, very much."  He’s a quiet guy.  But I know he’s going to miss this family.

I’m going to miss it.  I get a little choked up when I go shopping on post and watch helicopters land across the street. 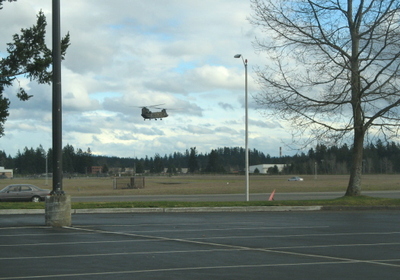 I got a little choked up a few weeks ago when I got caught in a small convoy of Strykers on post.  Talk about awkward.  And feeling small. This is a Stryker: 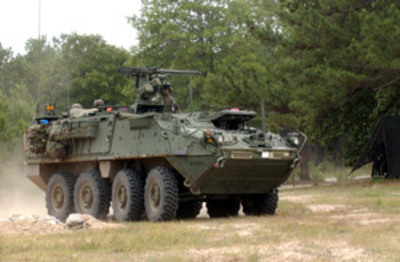 I get choked up when I trip over J.’s boots.  And that uniform.  I’m going to miss J. in uniform.  It’s such an iconic part of our lives.  But I won’t miss the good-bye’s (this was one of the last pics taken before J.’s last deployment; he was pretty devastated about leaving E.). 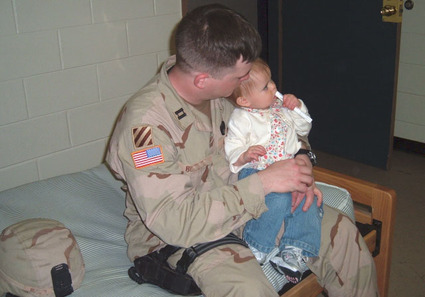 As I wrote this post, some kind of bombs were going off – a necessary evil, as its obviously part of training.  They’re pretty loud. And a daily occurrance around here (we live close to post).  Our neighborhood complains about it in the summer when our windows are open because inevitably they go off during the kids’ Precious Nap Time.  E. gets a little jittery every time she hears them.  "Big bomb, Mommy!"  I keep reminding her they’re "good bombs."  Yeah, those make me teary-eyed these days, too.

But, just because change is painful doesn’t mean it isn’t necessary.